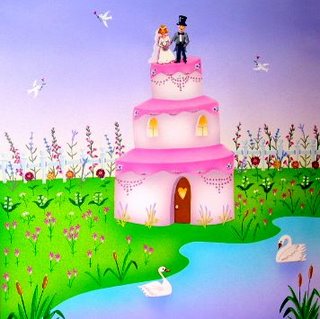 My Submission for Illustration Friday's Cake is from my 2003 HomeMade calendar. The title of this painting is "Home Baked" and is for the month of June. You know, a June wedding? The quote is: A House is not beautiful because of it's walls but because of it's cakes. ~old Russian proverb~
copyright 2002
Posted by valerie walsh at 9:56 AM 58 comments: Links to this post

The Art of Phil Hartman 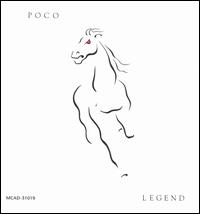 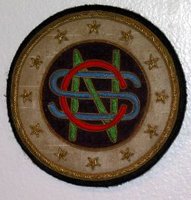 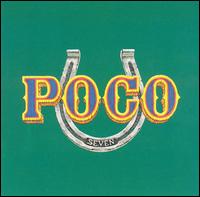 I loved Phil's art before I ever knew him and I watched him on T.V. and movies way before he became my brother in law. Phil died May 28, 1998. A day that changed the trajectory of many lives. But I don't want to talk about the day or way he died, I want to talk about his art. John and Phil were very close and they were born in Brantford, Ontario Canada. There were 8 Hartmann children all together. They came to California in 1959 and John went to work in the mailroom at William Morris in 1961 and worked his way up the ranks in the entertinment industry. When he became an integral part of the music business he was able to help Phil get job's doing album covers of many of the seminal rock bands that changed music as we know it. John managed the bands and Phil did the album covers. I have posted a few samples of some of the now famous covers that you might not realize Phil created. He was a very talented graphic artist as well as just an all around talented artist and he was good at pretty much anything he put his mind to. He spent 9 years on SNL which is probably the longest of all the comedians, he cowrote Pee Wee's Big Adventure with Paul Reubens, he played Captain Carl on The Pee Wee Herman Show, for the Simpson's he did the voices of Lionel Hutz and Troy McClure, he was in over 2o movies and he played a wonderful character on News Radio as part of a great ensemble cast. Back to the art, you can see from these paintings that he really had a creative mind and hand and the Poco horse and CSN logo are sheer genius! Their Mom, Doris had a real creative spirit and was a wonderful artist herself and owned a very cool shop in San Juan Capistrano for many years. We really miss Phil , but he lives on in reruns on t.v., movies, his artwork, his children, brothers and sisters and friends and fans.
You might have noticed on the picture of Phil, he signed it to John using the name Chippie. That is because everybody in his family called him Chippie, John's daughter (my stepdaughter ) Ohara named him this when she was a very little girl

1. America's Greatest Hits 2. Poco Seven 3.Poco Legend 4. CSN logo used on many album covers and this was a patch they made for Jackets 5. Poco Cantamos

Posted by valerie walsh at 6:07 PM 16 comments: Links to this post 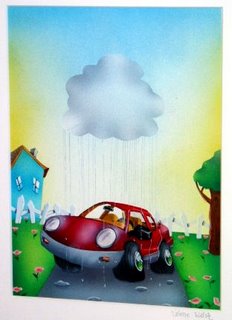 My submission for Illustration Friday's Sorry is from one of my Marisol greeting cards offering a deluxe car wash on the day of your choice. Hopefully on a sunny day!
copyright 1994
Posted by valerie walsh at 10:58 AM 47 comments: Links to this post

My submission for Illustration Friday's Angels and Devils is a dimensional resined painting called "Flying Home". Some of you might remember an illustrated version that I used for IF's Free theme. This is one of my most popular images so I have done it in every medium and colour combo you can think of. 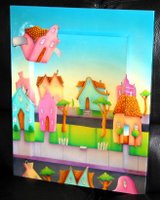 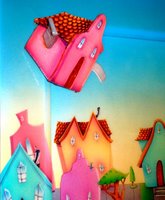 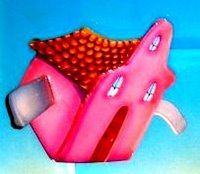 This pink house is an Angel flying back home to the hood and the Devil lives next door...

Posted by valerie walsh at 11:34 AM 46 comments: Links to this post

Under the Sea Part 2 Closeups 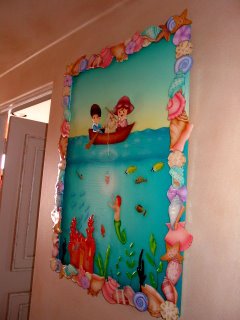 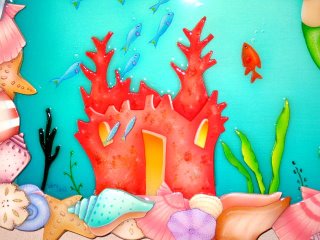 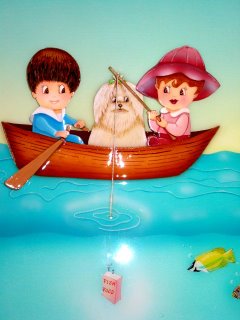 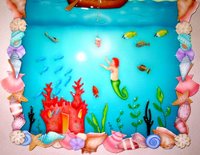 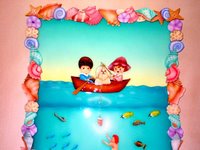 Posted by valerie walsh at 5:37 PM 10 comments: Links to this post

Under the Sea Part 2 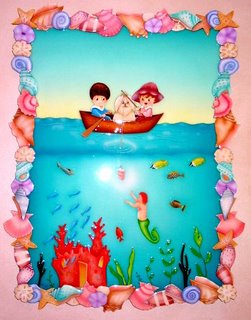 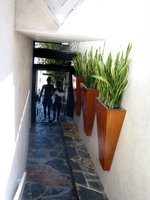 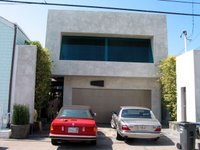 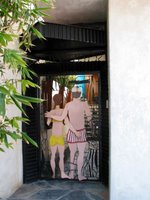 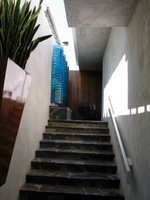 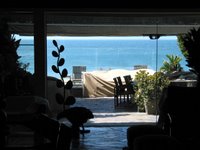 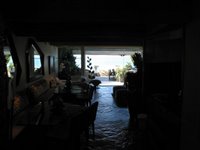 I mentioned that I had the perfect painting for Illustration Friday's "Under the Sea" and it occurred to me that instead of finding someone to scan my 2 1/4 film, I could call the people that I did the painting for and ask them if I could come over and shoot the painting with my digital camera. They live in Malibu Colony. If you ever have a chance to go to the colony you must accept, as it is a little slice of Paradise. It's also a gated community and you have to be invited to get in. www.seeing-stars.com/Live/Malibu.shtml
Movie stars have lived there since 1929 when the widow Rindge allowed celebrities to build houses and rent the land. The Rindge family owned all of Malibu from the 1800's to 1938. The family that I did the painting for are the Fishers, they live in a house that has probably been featured in Architectural Digest. I have never seen a house like this and I am honored that I have a painting hanging in this home as every single element of and in this house is a work of art. I called the Fishers and asked if I could come over and shoot the painting and they kindly invited me last Friday. I drove down and took a few photos of their house so that you can get an idea of how unique it is. It was at 10:30 am so it looked like a cave inside the main part of the house. The entire bottom floor is like a cave, all stone and it is so wonderful, they don't have a back wall like most houses, instead they have a glass wall that features the ocean so they get to watch the beauty of nature all the time without a wall obscuring the view! My painting was for a guest bedroom and all of the colours in the room are very compatible. They wanted a piece that included their fish (they have the most amazing built in aquariums) their dog (a Maltese) and possibly themselves (see their fanciful gate). Obviously I needed to have a water based theme and they live at the ocean, so it is a big part of their life. I decided to do them as children and created "Fishing with the Fishers". It had been over a year or more since I hung the painting, seeing it again with fresh eyes was nice! I felt proud that I made it and it looked great in the room. So many times I ship off a painting that I spend a lot of time on, never to see it hang in it's new home. Of course I had to make a little coral house where the mermaid lives...

Tomorrow I will post some more closeups of this painting because blogger won't let me upload any more pictures.

Fishing with the Fishers is a layered dimensional painting with resin.

Posted by valerie walsh at 7:19 PM 7 comments: Links to this post 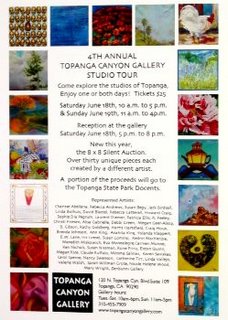 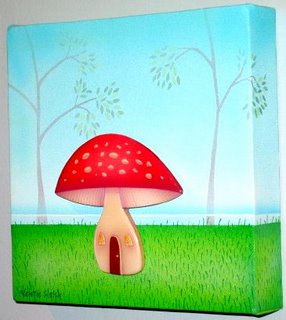 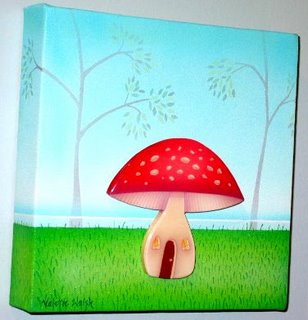 I have participated in the Topanga Art Studio Tours all 4 years since the inception. This will be our 5th tour and it is a wonderful experience. Studio tours are usually the second week of June for 2 days. You start out at the gallery, each artist will have one piece of art hanging , one silent auction painting and you purchase a book for $25.00 it has a description plus a bio of each artist with a map of how to get to their studio. For 2 days you can visit as many studios as you would like. At least 50 artists are involved. Last year they started a silent auction. They provide you with an 8" x 8 " canvas and if you finish it by May 1st it is photographed and included on the promotional invite they provide for the artists, they also make an e-vite using the art too. This tour is the perfect show for me because I am pretty reclusive and this way I don't have to leave my house! The people usually come in small waves so the art lovers get to have one on one time with the artist. People that enjoy coming to Topanga and seeing the houses, gardens and life here enjoy the tour too. Here is my auction painting that I made last week it took 3 days because I made a little mushroom house and resined it so that added more time. I decided to use my theme of the forest as a room along with this little mushroom house growing out of the grassy carpet. The bidding will start at $50.00 and I will donate all the proceeds to the gallery. The invite hasn't been printed yet so I used last years invite to show how it looks with all the 8x8's. The show this year is Saturday, June 10, 10:00 am-6:00 pm and Sunday, June 11, 11:00 am -5:00 pm. Reception: Saturday, June 10, 5:00 pm to 8:00 pm at the Topanga Canyon Gallery.
Posted by valerie walsh at 4:37 PM 9 comments: Links to this post 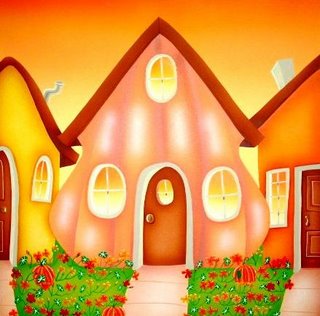 My Submission for Illustration Friday's theme Fat is from my 2002 HomeMade Calendar for the month of October. The title is "Home Grown". I have always loved the idea of the annual pursuit to grow the largest pumpkin.
The quote is : "Wide is the door of the cottage" ~proverb 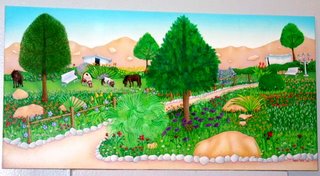 I am so happy today!!! I have finished a painting that I have been working on for months! It is why I am behind on everything else in my life! It is one of the most difficult paintings I have done. The reason for this is, it is not really a house. When I started my blog, I wrote that I received a commission from a couple who wanted me to do a Houscape of their miniature horses abode and back yard. It got put put on hold for a couple months and then everything fell into place and I started the job. Normally even though I love a challenge I would have said no. This is not what I do. This is a landscape and I don't crave doing landscapes. I truly love to paint houses. But they have been good patrons, they have commissioned 2 other paintings and said I could take as long as I need to. That means I can do other jobs that come in so I decided to accept. Well, I finished the horses houses very quickly and then I was faced with all of the plants and flowers. I am such a detail person that it took months which was not my plan but the painting comes out of me the way it needs to and I am just along for the ride. Some days it flowed and some days it was a pain in my tush! I have about 5 minutes to rejoice and now I have to do the 3 projects that are sitting on my desk waiting to be started. Momentary bliss!
Posted by valerie walsh at 11:38 AM 17 comments: Links to this post