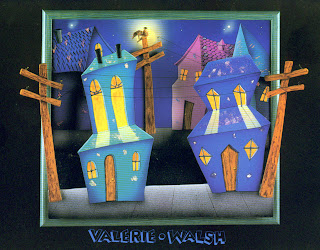 My submission for Illustration Friday's "Communication" is from a dimensional painting called "NightHawk". I posted this September 2006 with a story about how this piece came to be, but I didn't post it on IF. My inspiration was this hawk in an alley in Santa Monica on a telephone pole. I see hawks all the time in Topanga but it is unique to see them in an industrial area where it was spotted. This painting was purchased by a woman who collects my work and was used as an invitation/promotional card for a show I had in Pacific Palisades. I posted this card "Phone Home" in July 2006 for the "Opposites" theme. 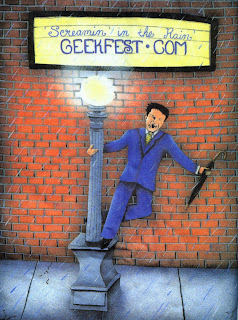 My submission for Illustration Friday's "Gravity" is from a painting I made for Geekfest.com for Microsoftee's (people that work at Microsoft) and they used the art for a T-shirt. I loved creating this image because it was so different for me and my favourite jobs are when I get to come up with an idea that works on a few levels. Microsoft has a mascot called the "Screaming Geek". They wanted a piece of art that used the geek for an upcoming event and I was given a picture of the character . So I decided to turn him into Gene Kelly, use the idea of "Singing in the Rain" (It always rains in Seattle/Washington and Microsoft is based in Redmond, WA) and turn it into "Screamin in the Rain". Gene Kelly is the guy known to defy gravity and I was able to sneak a building/brick wall in the scene too!
copyright 1996 Microsoft
Geek image on back of shirt and this logo is on the front. 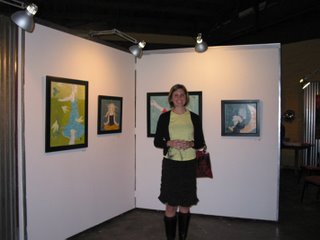 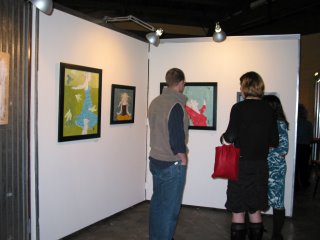 Here is Penelopes work and I asked her to stand in front of her art! She is darling and very nice!


On Saturday I had to go photograph an upcoming "Houscape" in Encino. It is a doozy, a very unique house that was moved from Palm Springs a long time ago and plopped into the San Fernando Valley. It fits in quite well, it has a slight tropical vibe with lots of waterfalls and it has that old Frank Sinatra feel that so many houses designed in Palm Springs have. I would like to finish in a month but this could take 2 months as it is pretty complicated. Then we were off to the "Girly Show" just a little south of Hollywood on West Pico Blvd (2 blks. south of La Brea). It was in a tucked away space called: Deja Design Gallery and it was a big open building. The show was from 4-11pm. We arrived a little before 6pm so that I could talk to the artists before it got crowded and take a few pix if they let me. John found Penelope Dullaghan and we introduced ourselves. She asked me how long I have participated in Illustration Friday? I told her a year and some change but that I submitted every Friday. She seemed surprised, then John said "You know Val uses existing work! She said she was going to find a word to stump me! Uh-oh, now I am in trouble... Penelope is a darling, tall and sweet artist and I loved meeting her and her art was great! I think she created these paintings for the show. She gave me a hug and introduced me to Kelly Rae Roberts, another artist that we all blog with and she had many charming paintings in her wonderful style. I wish I would have asked her to stand in front of her paintings and taken a picture (sorry Kelly Rae). She is adorable, fresh and sweet and introduced us to her husband John. All the paintings are fun, girly, unique and each artist has a signature style that blended well with each other. I did remember to take 2 shots of Penelope and her paintings, so for all that wanted to go but couldn't this is a snippet from the event. The show featured: Christine Mason Miller, Mati Rose, Outi Harma, Marisa Haedike and Kelly Rae Roberts. I'm sure they all will have much success!
Posted by valerie walsh at 10:08 AM 9 comments: 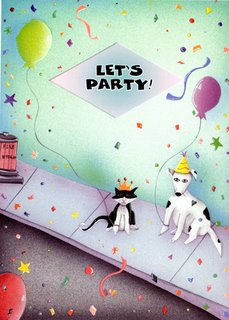 My submission for Illustration Friday's "Crash" is from one of my Marisol greeting cards. This is the kind of party I would crash, dogs and cats living together and having a big ol party! 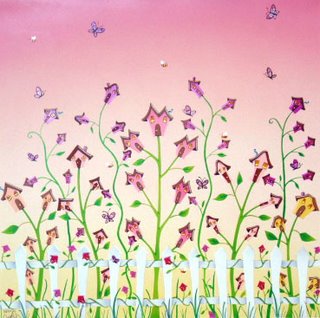 My submission for Illustration Friday's "sprout" is from my 2002 HomeMade calendar and the title is "House Plants". This is for the month of May and the quote is: Home is the blossom of which heaven is the fruit ~proverb~
I have always enjoyed the quote: Grow where you are planted.