This image is a constant theme in my work and I have painted it many ways,colours, in different mediums, sizes and dimensionally sculpted it too.This version is from my personal stationary except my letterhead would be inserted in the sky. The unfinished illustration below would be perfect for the Illustration Friday's topic "soar" but it keeps getting set aside for more pressing work. Hopefully one day I will see it as I do in my mind in a children's book form titled "Flying Home". That would make my heart soar! 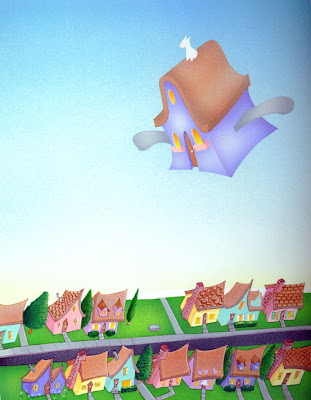 I hope everyone has a fun,safe and very Happy New Year!!!
Posted by valerie walsh at 11:33 AM 39 comments: 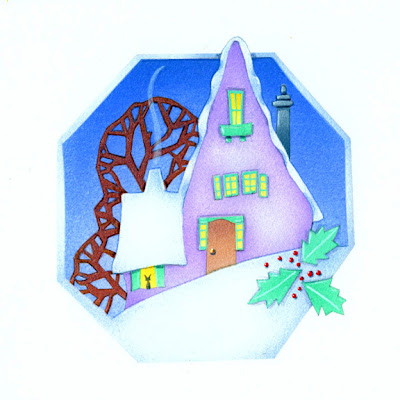 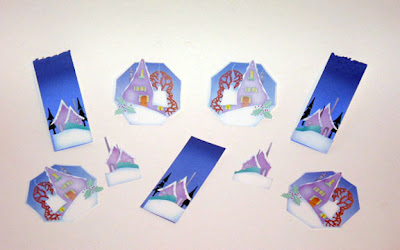 This submission for Illustration Friday's "horizon" is a diecut gift tag that doubles as a decoration. I enjoy shades of lavendar and purple for the holidays *** 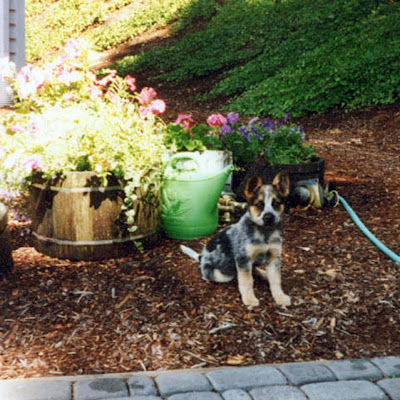 I received an early holiday gift of more time with my dog Rat. On November 28 he seemed unwell. As soon as my vet heard his breathing he said Rat was experiencing heart failure. We rushed him to City of Angels Vet hospital and they told me he probably would not live. The next night my vet called and thought I should put him down. It all happened so fast that we told them we wanted him to stay one more night. The next morning, December 1st we went to visit him and he was stable and able to come home. They saved his life with Viagra! He has born with a lung disease and it caused the right side of his heart to overwork and enlarge. It's called Pulmonary Hypertension. Viagra was developed for the heart and of course a bonus side effect was discovered... but now he takes this medicine and it has given him a second chance at life and the greatest gift for us!

Hope and happiness are on the horizon... Happy Holidays everyone!

Some folks like the bright lights, big city. nightclubs and swanky eateries. Call me backwards, but I love a small town any day. My submission for Illustration Friday's "backwards" prompt.

My Scribbleguild group is sending out a winter mailer and this is the image I made for the project. Acrylic on Canson Airbrush paper. Please click on image to view it larger*
Posted by valerie walsh at 11:16 AM 38 comments: 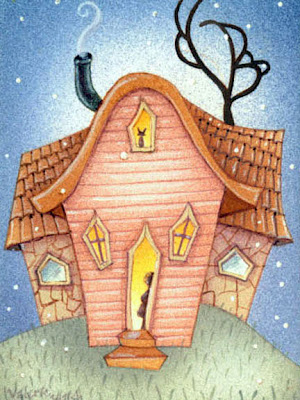 Here is my submission for Illustration Friday's "Little Things" prompt. It is a little painting 2.5" x 3.5 titled "First Snow". It is a little child standing in the doorway watching the first little flakes fall. It really is the "Little Things" in life that help us understand what's important.
A few of my friends asked me to put some gifts in my Etsy shop for the holidays. I used to be big time into gift making. When I was 19 (29 years ago) I started my own hand printed greeting card business here in Topanga. I would silkscreen in my studio, a limit of 3 colours and I would hand deliver, wrapped with a ribbon in a paper bag. I had tons of takers, they were all wonderful people and all of their friends would hope to receive one of my cards. They were printed on hand made paper, limited and signed editions. It was a unique little business that made people happy at the holidays.
Posted by valerie walsh at 10:26 AM 37 comments: