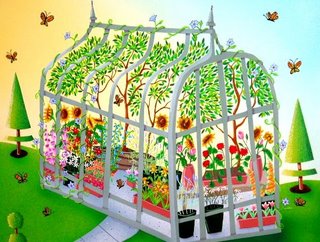 Please click on to the top illo for a closeup view 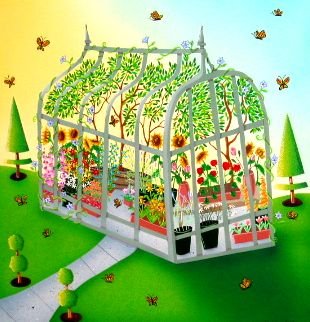 My submission for Illustration Friday's topic, Spring, is from my 2001 HomeMade calendar. The title is Green House. This is a favourite of the people that collect my work. I loved making this one. Spring is here and I am so glad! Happy Flowers everyone! The quote: To Adam, paradise was home, To the good among his descendants, home is paradise. ~ Hare
GreenHouse copyright 2000
Posted by valerie walsh at 9:13 AM 70 comments: 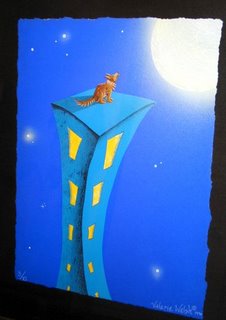 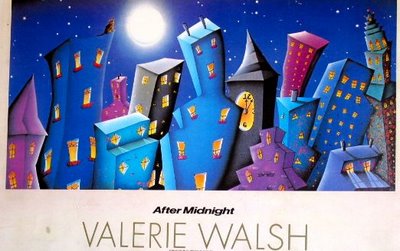 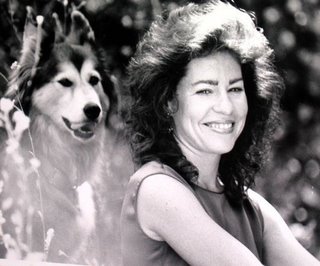 Recently I had to go through all of my past life to put together a professional resume. Funny, it has been so long since I have needed a resume. I mentioned that I lived with artist Michael Bedard in the 80's. We used to go out to the desert to a mineral hotsprings at a spa called Two Bunch Palms. They used this place in the movie "The Player". It was Al Capone's hideaway just outside of Palm Springs. When we would stay it was not super well known so it was a real nice 3 hour get away from LA. It was at this very place that Yote walked into my life. She looked an awful lot like a coyote when I first caught a glimpse of her and she was wild as can be. Michael's dog Hopi had recently died and it was extremely sad and lonely for us. A woman at the spa told me that she had been feeding Yote (This is the name I called her) but she had many dogs at home and could not take her, she was concerned for her welfare and wondered if we could help. We decided we would try to see if she would come with us and indeed she did. We brought her to our beautiful home, we lived on one of the premiere pieces of property in this town, very remote on a mountain way up high facing the ocean with no other houses in our view. Yote was the first dog that was really mine. She quickly became my best friend and she was a real beauty. I started including her in my paintings and the weirdest thing happened, people would always buy them. I would juxtapose this wild dog in a city scene and paint away. I made prints, they would sell. I did an enormous painting "After Midnite" not only did it sell right away but Yamakatsu published it as a puzzle and it sold out every run they made. I would always get excited and tell her we were going to eat well tonite! I was interviewed in the newspaper and my longtime photographer Dave Sessions came to take my picture and Yote somehow got in the shot. I rediscovered this photo the other day, it was not the one used in the newspaper but she looks like a ghost! When she died, I vowed I would never have another dog because it ripped my heart out but then I met Rat and I could not resist...

Once again please forgive the hair, big hair was in then. I should have mentioned this in" Five Strange Things" but my hair started turning white when I was 18 so of course I dyed it for years but in 96 I went au natural. 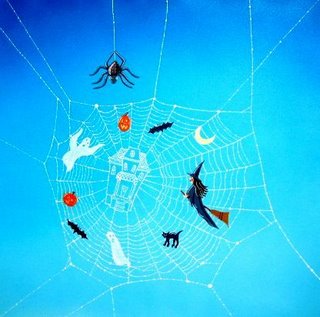 Well, here is my Illustration Friday submission for Monster. I don't really do Monster but this is the closest I can get. This is from my 2003 HomeMade calendar and the title is "HomeSpun". It was for the month of October and the quote is: "Every spirit builds itself a house" ~ Ralph Waldo Emerson.
This is a miniature version of Bates Motel!
copyright 2003
Posted by valerie walsh at 9:06 AM 64 comments: 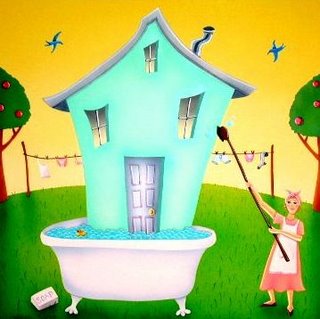 My submission for Illustration Friday's topic: Feet is an illustration from my 2002
HomeMade calendar for the month of April. The title is "Bath House".
The quote I used is "Housekeeping ain't no joke." ~Louisa May Alcott
Posted by valerie walsh at 9:34 AM 60 comments: 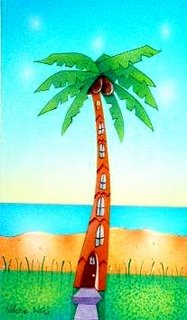 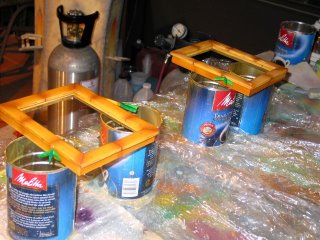 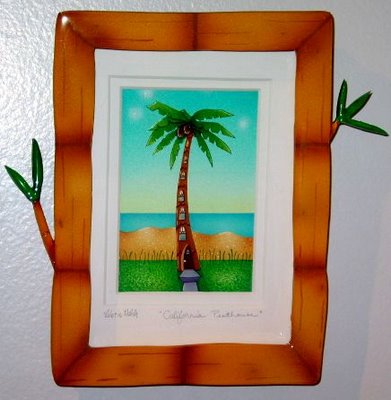 There are so many good causes and it is hard to decide who to give to. At least twice a year a worthy charitable organization contacts me about a donation of art. I am always happy to help out. I have a lot of prints and gift packages of cards and fun stuff. There are some charities that would benefit more from the gift of an original. I decided to create an original for www.operationdreamseed.org . It gives the gift of notebooks, pencils and craftsupplies to children in Afganistan. My neighbor Gerlinde Gautrey works tirelessly for this cause and I felt that if I made a fun painting it could raise some much needed dollars for the benefit they were holding on March 11th. I decided to look at my list of ideas and I felt as though I could pull off somthing quickly using the idea, "Penthouse". I pictured this idea in my head, using a tongue in cheek view of what could be the outcome of escalating costs of beachfront property and all property here in California. Then I realized that I needed to make a custom bamboo frame to get the buyers juices flowing. This way you get a completely unique item and the original is 3" x 5" so the whole piece is only 5"x7". I really enjoyed making this painting and frame and I decided to make two. This sometimes happens with me when I make something small, I always flip the painting and make another in reverse. I change it up in subtle ways so there are differences. They both are originals, paint on paper with a custom frame but they make a pair. It is a lot of work to pour resin and make your own frames so that is one more reason to make two. I have not heard the outcome of the auction but I hope they had a good turn out, it was raining on Saturday... I hope it went to a good home! 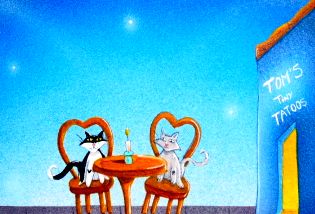 I had an art emergency this morning.I broke something I just completed. aaaaargh! I fixed it and spent a while looking for this old spot illustration. Tom's House of Tiny Tattoos. You know the world has gone to pot when a girl, as a symbol of devotion has her new boyfriends initials in the shape of a heart tattooed on her body parts. Babs new friend seems to be a bad influence! Kitties these days, they are so romantic...
Posted by valerie walsh at 10:25 AM 49 comments: 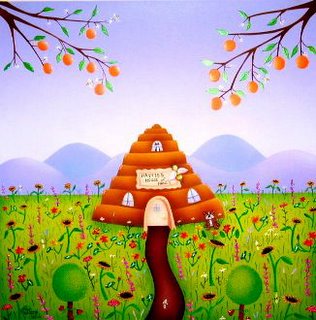 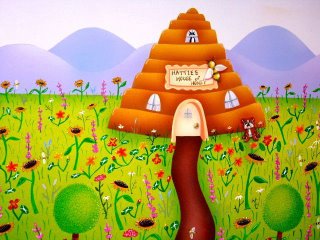 My submission for Illustration Friday: Insects is called "Honey House". This painting is from my 2004 HomeMade calendar for the month of May. Bees and flowers make the world go round!

The quote I used was: "One comes back to these old fashioned roses as one does to music and old poetry. A garden needs old associations, old frangrances, as a home needs things that have been lived with. -Marion Paige
Hattie is my Aunt Harriet and this is her bulldog Rothschild
copyright 2004
Posted by valerie walsh at 9:32 AM 66 comments: 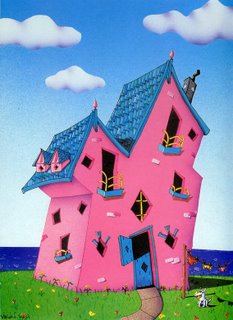 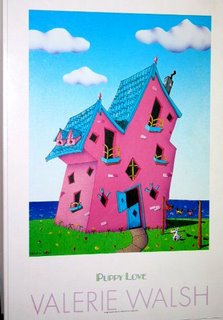 In 1989 a puzzle deal just fell into my lap. I landed a Japanese agent through my friend, artist Michael Bedard. Bedard and I lived together for 7 years and we shared the same publisher but by this time we were just friends. During the 80's and into the early 90's Japanese agents were coming here and signing deals with artists for all kinds of amazing products. Bedard is originally from (Winsor, Ontario) and Stuart Moskowitz a well known Topanga artist and one of Michaels oldest friends both had good deals selling and licensing their work in Japan. Both of these artists have sold more posters and prints than probably any other artists. Michael did an animated ad campaign for Akai. He had a wonderful agent and introduced me, he liked my work and I signed on and got a major puzzle deal . The company that produced the puzzles, Yamakatsu really made a perfect product. Puzzles were super popular there! They were made replete with a board that folded and fit in the box (an ingenious design). You made the puzzle and could adhere it to the board with the glue and sponge that they provided. The highest quality materials were used, the printing was exceptional and they lifted portions of the image to decorate all four sides of the lid. They made a VW (Valerie Walsh) logo sticker for me that was added to the side of each box.

My puzzles became very popular so they did several runs. One reason people liked them was they were difficult to put together, also they are 1000 pieces. I always have a lot of sky and open space in my paintings and that contributes to the degree of difficulty, which is what you want with puzzles. Collectors would hang them on their walls and then on to the next puzzle. The best part was they used my existing work! That rarely happens for me, usually I have to create something for the project or collector. They really didn't understand some of the sayings like "Puppy Love" and if you will notice the picture is a little naughty so it was cute that they chose that image. They also used Five o' clock, Strumpeter, and After Midnite. It makes for such a nice business experience when a commercial product is treated like a piece of art.