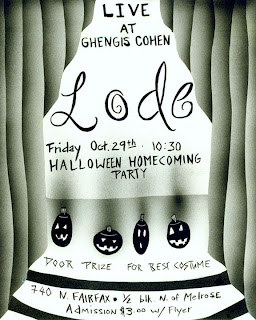 This is a blast from the past, 1995 to be precise. When John managed Lode they used to make flyers to get people to come to their gigs. This was for Halloween and I turned each person from the band into a pumpkin :) Inara George was the lone girl in the band and she is the SKINNY pumpkin and all the rest are the boys: Gabe Cowan, Robin Moxey and Lon Baker. Sometimes the bands artist friends would make the flyers and sometimes John would come knocking on my door to ask if I could crank out a quick flyer to advertise the band and I would happily make art for the group. We did lots of them :) I kept them all because they were so talented and I knew they would make it and they have, just not together. Good Times. This incorporates Halloween and skinny in one fell swoop for Illustration Friday's "skinny" theme. Here is Lode courtesy of Geffen Records. 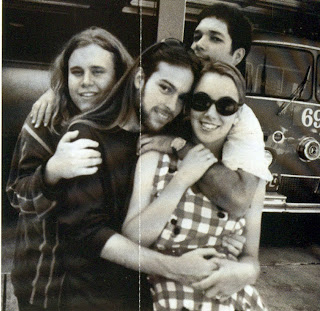 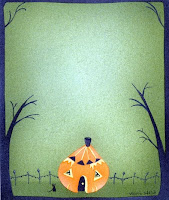 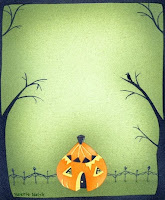 A "fast" GROWING and very GREEN trend are PUMPKIN Houses. Grow one today!

Steve Millers Pumpkin House
click on to pictures and links to view larger
"Pumpkin House with Tar the cat" Stationary Card for Monday Artday Stationary 2009 Valerie Walsh
"Pumpkin House with Topanga Crow" Stationary Card for Monday Artday Stationary 2009 Valerie Walsh
Submissions for Illustration Friday's "Fast" theme.
Just want to mention that JC & Doodlestreet won the Business Card Giveaway and Diana Evans won the Greeting Card Giveaway! So please sign up for the Sticker Giveaway and the Postcard Giveaway all sponsered by Uprinting and you can win free items and all you have to do is leave a comment on the posts telling me what you would do with your winnings :)
Posted by valerie walsh at 9:24 AM 34 comments: 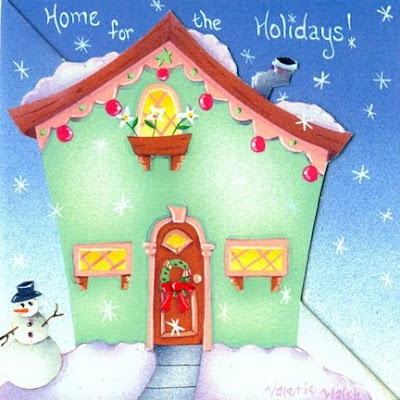 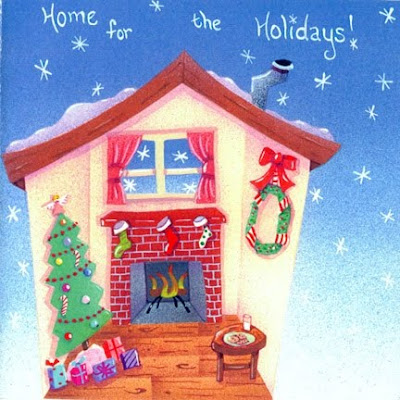 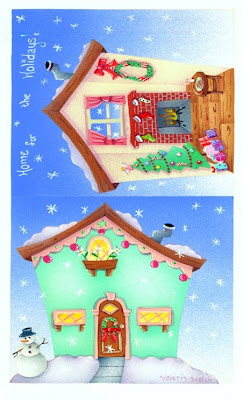 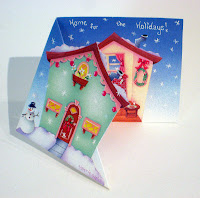 Frozen on the outside and warm on the inside.
diecut holiday card for Illustration Friday's "frozen" theme.
2006 copyright Valerie Walsh
please don't forget to sign up to win free business cards from Uprinting you have 5 more days (October 22) and 2 winners will be announced.
Posted by valerie walsh at 12:05 PM 30 comments: 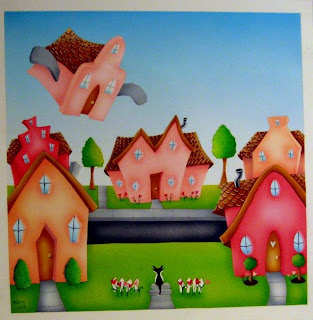 My submission for Illustration Friday's "Flying" theme is the cover of my 2004 HomeMade Calendar. The image is titled "Flying Home". I have not shown this version but I had to use this for the prompt because it is a signature image for me and I have done this very painting in 4 colour combos, I have made several dimensional versions and a variation of this idea has graced my stationary & business cards. The card below is a reversed version of the stationary card I submitted a few weeks ago. When I have time I try to paint the image I am working on in reverse so I have two versions and I fleshed out the windows a bit more so you can tell these butterflies are houses. This fits the flying theme well too. 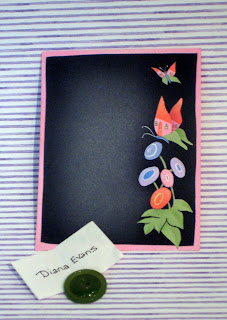 Today I had John choose a winner from the pool of submissions for the Uprinting Greeting Card Giveaway and Diana Evans is the winner and she will receive 250 greeting cards!!! I will receive a set for sponsoring this contest on my blog. Tonight I will launch a new Uprinting Giveaway where 2 of my friends will receive 250 business cards so please keep trying because you are bound to win one of these gifts and all you have to do is tell me what you will do with your printed item and who you plan on giving them to :) Thank you to all you girls that participated and Congratulations Diana!!!
copyright 2004 valerie walsh
Posted by valerie walsh at 11:50 AM 27 comments: 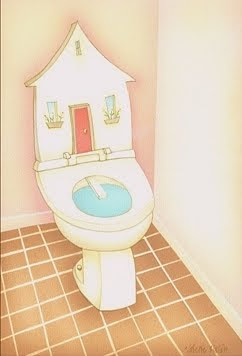 My submission for Illustration Friday's "Germs" theme is a bit late this week, it is called "Where Germs Live". It has been pretty exciting around here because PBS American Masters series came to our house to film John for the David Geffen episode. The creator, Susan Lacy is an amazing woman. She directs, interviews and executive produces the show. She has interviewed 20+ people already for the Geffen story and it includes Steven Spielberg, Jeffrey Katzenberg, Joni Mitchell, Elliot Roberts to name a few. John was amazing in the interview and the whole crew was mesmerized by his stories of the groundbreaking music and the business of managing the great artists in the 70's.
In case you might think I have gone off the deep end with this illustration please notice the article and real home below. I now feel completely VALidated :)
2009 Valerie Walsh
TOILET HOUSE 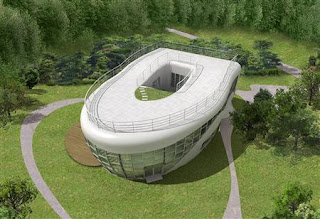 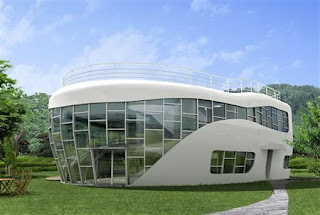 The Toilet-shaped House has a very unique design and was built by Sim Jae-duck, the chairman of the organizing committee of the Inaugural General Assembly of the World Toilet Association, and he hopes his toilet house will highlight the global need for better sanitation. The Toilet-Shaped House is in fact named Haewoojae which signifies in Korean a place of sanctuary, where one can solve ones worries, Sim Jae-duck opened what is billed as the world's one and only toilet house to mark the launch of his World Toilet Association. The steel, white concrete and glass house, with a symbolic opening in the roof is a 419 sq, m structure with two bedrooms, two guestrooms and other rooms, the two-story house of course features three deluxe toilets.Unlike the giant toilet in which they are located they are not see-through affairs. If you would like to visit this house you can go to Sim Jae-duck's native city of Suweon 40 km south of Seoul.